The Faction System is designed to promote organized player conflict within the Felucca society of Britannia and encourage the inclusion of a wide array of play-styles. There are four factions:

Each faction has their own stronghold and ranking system.

Each Faction has its own stronghold, a place where their Faction stone resides and where the members of that faction are to take any sigil they might obtain. The stronghold is the base of operations. Faction strongholds are currently located at the following locations:

Council of Mages– Off the southern tip of Moonglow a strange starfield encloses the base except for a narrow bridge from the island.

Shadowlord– Located in the unused crypts in the Yew forest, a fair distance in a direct line northeast from the east Yew Healer’s Shop named “Deep Forest Healing”. This is not the Yew Graveyard, but instead the haunted crypts east of the Yew moongate within the woods.

True Britannians – Located within Lord British’s Castle, in the town of Britain.

Players who join factions will be able to participate in the combat, politics, and trade within the Faction system.

a) Non-guilded players:
Double click the Faction Stone, and select the “join” option.  You will be able to join as long as the following conditions are met:

b) Guilded players:
If you are in a non-faction guild, you must resign from the guild before you can join factions.

Before you can join a faction guild, you must first join the same faction as the guild.  You will then be able to be guilded.

c) Joining a guild to a faction:
Only the Guildmaster of a guild can use the “join” option on a Faction stone for that guild.  When the Guildmaster for a guild joins the Faction, all players are added to the Faction whether online or offline.  The guild is checked for the following:

Characters who are not in a faction will not be able to perform beneficial acts (such as healing, curing, etc.) on any character in a faction in Felucca.  This rule applies to pets as well.

Unguilded players are able to resign from a Faction by resigning at the Faction stone.  This is not the same stone as that at which the faction is joined, but the stone that is found in the stronghold itself – pictures below.

During this three day resignation process, players resigning from the Faction will not be able to use the faction stone or steal sigils but will still be eligible to attacks from opposing Faction members.

Resigning players can find out how much time they have left in the faction by saying in game: “What is my faction term status“.

There are 8 cities that can fall under the control of a faction. The towns and the location of the townstones and monoliths which are used for controling the town are listed below: 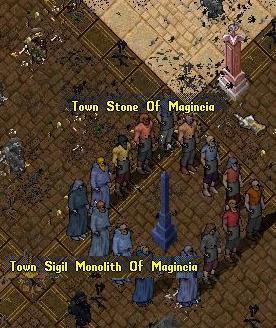 How to capture a town:

Faction players are eligible for public office within their faction. The three eligible offices are:

Each town under the control of a faction may have one sheriff appointed to it by the faction Commander. The Sheriff abilities are as follows:

A Faction Sheriff may also view the finances in the town treasury. This allows for them to plan for the distribution and expenditure of the silver available. The Faction Sheriff and Faction finance Minister both are able to allocate this town treasury for the various Faction activities.

Note: War horses have additional amounts of strength and stamina and can be reserrected by it’s owner without using the Vet skill.

Floor traps can be created by Faction members with the proper tinkering skill amount. There are four different types of floor traps: Spike, Saw, Gas, and Explosion Trap.

The Faction member must have at least 90 skill points in tinkering to create a faction trap.

A maximum of 15 traps can be placed at any given time.

Traps can only be placed in Faction-controllable cities or within Faction strongholds.

Traps will only affect opposing Faction members, not members within the same faction as the trap creator. The traps cannot be set to selectively ignore any other faction.

Traps will be visible for one full minute if someone in a faction uses the “detect hidden” skill on the trap. This will reveal the trap for one full minute globally, so that anyone within range can see the trap during that minute. This allows for faction members using a trap they own to have the opportunity to show their fellow faction mates the location of the trap.

Those faction members with the detect hidden skill will get a display message alerting them to a trap in the area.  They can then attempt to reveal the trap.

Traps can be removed by opposing Faction members through the use of the “remove trap” skill.  The faction Commander can also use the remove trap skill (without having the skill), but only on traps created and placed by members of his/her own faction.

When the victim’s kill point total is 19 or lower, the winner will receive 1 kill point.

When a Faction player reaches a deficit of 6 kill points, the winner will receive 0 kill points.

b) Deficit
This means you have died more than you’ve killed and are now in the hole so to speak.  The most deficit points any faction member can have are 6.

c) Point transfer
Once a day players can transfer kill points. Both parties must be members of the same faction, and the one who is giving the points must have at least 10 kill points. Once transferred, player A (giver) loses 5 points and player B (receiver) gets 4 points (1 point is lost in the trade).

To transfer kill points, say “I honor your leadership” and a target cursor will appear that can be used to select the player the kill points are to be transferred to.

d) Titles
Once per day, all faction player scores are recalculated in order to assign faction rank. Titles vary within each faction as described below. (note: faction titles aren’t always accurate.)

Death at the hands of a Faction Enemy = Stat Loss

To get Silver for the Faction:

Faction Players: Silver can be used by Faction members to obtain the following:

Silver is taken from the player tithes and is placed into the Faction Treasury. The finance minister and Sheriff for that town can use these credits for various expenditures, such as Faction vendors and/or guards.

Floor traps are created by players in the faction system with the tinkering skill.